Sheesh... Artists Are So Sensitive

Following a blogpost criticizing interpretive dancer Margie Gillis for her bizarre remarks during an interview with Sun News Network's Krista Erickson -- claiming that 1998-2011 was a "39-year period", and that receiving millions of dollars in government funds to do what she loves to do is a "sacrifice" -- a Grant MacEwan music composition graduate by the name of Andy AF Burns decided to take exception.

His "arguments" proved to be razor-thin, but when they weren't extended what he considered to be the demanded consideration of merit.

What followed was, without a doubt, one of the most pathetic displays in the history of the internet. While Mr Burns should likely have been reported to the police for uttering threats, it seems a public humiliation should serve better: 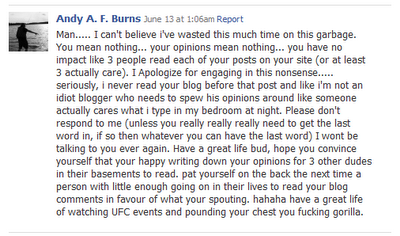 It requires a remarkably disturbed individual to threaten to run someone over with a car, and then call them a "fucking gorilla".

Perhaps it's as good a reason as any to not question an artists' sense of entitlement to a small fortune in government grants: in this case, Andy AF Burns' bizarre mix of sensitivity, irrationality, and primitive violence bubbling just under the surface.

But if any Edmonton-area readers happen to know Andy AF Burns personally, do him a favour: have him seek professional help. He needs it. Desperately.