Canadian Centre for Policy Alternatives: The Wrong Advice for Canada 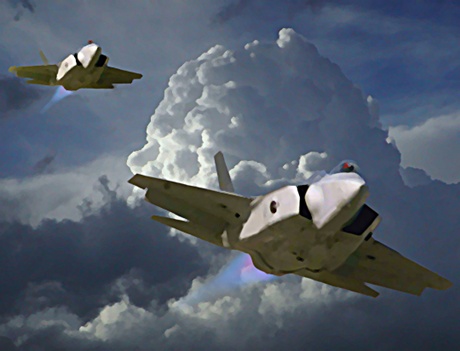 Canada's most reliable source of far-left drivel dressed up as "academic research" has offered some advice on Canada's planned purchase of F-35 fighters:

"This is a massive commitment of defence spending on 'flying Cadillacs' that is being driven by defence contractors, not by a clear-eyed view of Canada's defence needs," explained the CCPA's Steven Staples, who wrote the report. "The main point is that we have time and we need to change the way we think about our aircraft. We don't need them for bombing missions and there is no real Russian bomber threat."

"Let's also investigate the acquisition of the next generation of unarmed, long-range, long-endurance, pilotless aircraft," he concluded.

Put emphasis on the "unarmed".

It's a foolish assumption on the CCPA's to suggest that Canada should make its long-term defence planning decisions based on the current lack of a substantive threat from Russian bombers, given that with Russia's increasingly-aggressive stance on foreign policy this is almost certainly subject to change.

Moreover, it's foolish for the CCPA to suggest that Canada should make its long-term defence planning decisions when the CCPA's own pet causes would actually require Canada to have these kinds of capabilities.

Case in point: the CCPA has often suggested that Canada should return its military focus to peacekeeping in order to help meet the demand for missions in places such as Darfur.

What the CCPA chooses to omit from these recommendations is that, all too often, modern peacekeeping missions are combat missions. Combat missions require air support, and there is no fighter jet better optimized for ground support than the F-35.

This renders Staples' suggestion that Canada should invest in unarmed aircraft all the more ludicrous. Such aircraft would be nearly useless in a combat scenario, and no more useful in terms of maintaining arctic sovereignty: whether the ideology of the CCPA permits them to admit it or not, these aircraft require the necessary firepower to repel an invader.

It's a sobering reminder that the CCPA -- who deign to give advice to the Canadian government -- have no clue what the hell they're talking about. They live in a far-left ideological fantasy world.

One that the Liberal Party seems perfectly content to offer to join them in. They've suggested that if they form government before the deal is completed, they'll scuttle it.

Of course, Canadians should remember what happened the last time the Liberal government cancelled a military procurement upon taking office. It was the contract for helicopters to replace the Sea Kings. Jean Chretien called them "flying Cadillacs" as well.

That grossly irresponsible decision led to the deaths of Canadian pilots, just like scuttling the CF-18 replacement would.

The very most that can be said for the CCPA is that they've never had to be responsible for the consequences of such a decision. The Liberal Party already has. And it seems that they just never learn.

It probably helps that fools like the CCPA keep providing them with one more far-left audience to pander to, giving them an incentive to never learn.