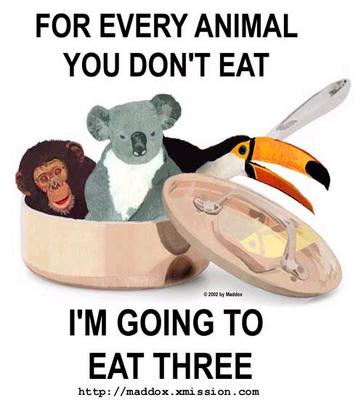 Hoo boy, PETA again. You would think at some point these people would stop giving me stuff to work with. Think again.

Recently, PETA issued one of their “action alerts” (basically their asshole cronies to act like assholes). This time, they are targeting none other than Oscar Meyer – purveyors of meat products (notably hot dogs), and that delightful song.

Wait. Where was I? Oh, right. Douchebags.

Of course, this isn’t your average douchebaggery. This is PETA-style douchebaggery (apparently, the self-righteous yuppies have a style all their own).

PETA has issued an action alert urging people to enter the “Ride of Your Life” contest, in which 20 people will win the opportunity to use the beloved Oscar Meyer weinermobile for a full day. They have urged the people to win the contest to “put the weinermobile to use, PETA-style” (you can stop laughing any time now) in order to “show people how bad eating meat is for people and animals.”

Yes, that’s right. PETA desperately wants a weinermobile. More to the point, they want Oscar Meyer’s – whereas they could just fill a Chrysler P.T. Cruiser with as many of their members as can fit in it – which I’m guessing would be a lot of emaciated vegetarians. But that’s beside the point.

If anyone needed anything to convince them that PETA has entirely too much time on its hands – which, obviously it chooses to spend climbing onto that high horse they aren’t supposed to be riding (animals aren’t for our exploitation, you see).
Seeing as how encouraging people to act like assholes is all the rage these days, I’m throwing my hat into the ring. I will award an official “Nexus of Assholery” no-prize to anyone who will take the Oscar Meyer weinermobile, drive it to the PETA head office in Norfolk, Virginia and sell hotdogs in the parking lot in front of their building. I will award TWO of these priceless (albeit worthless) no-prizes to anyone who will eat a hotdog directly in front of anyone who comes out to complain. THREE if you spray them with mustard and set fire ants loose upon them!

The Legend of David Mainse and the Queen

No, not a drag queen... but imagine if it were!

How does one top claiming Paul Martin has been possessed by the devil, and that Bill C-38 is the work of said devil?

Apparently, one starts a letter-writing campaign urging Britain’s Queen Elizabeth II to order all of her government representatives world wide to refuse to ratify same-sex marriage.

“ Our beloved Queen Elizabeth II, I know that the refusal of the Governor General to give royal consent would precipitate a crisis. Millions have nowhere else to turn but you,'” Mainse wrote in a recent letter. Because apparently, broadway-themed weddings for gays and lesbians is the worst thing to happen since Hitler. Or ever. “ Please help humanity everywhere to begin a reversal of this morally and socially destructive trend,” Mainse pleads.

Wow… David Mainse really hates broadway. Or is it gays and lesbians? No matter.

Ever since the same sex marriage bill became a hot-hot-hot button issue for Canadians, Mainse and his Crossroads foundation cohorts have rarely missed an opportunity to show Canada ugly new (or, perhaps, old) sides of their character.
Take David’s latest gambit for example. He acknowledges that the refusal of royal assent would cause a “crisis”, but doesn’t seem to care much. He also begs her majesty to help “humanity” (hmmm… gays and lesbians are apparently no longer human, so says the book of God, as interpreted by our dear Davey) fight this “morally and socially destructive trend”.

Maybe it’s just me, but it seems to me that in the few weeks since Canada’s parliament passed Bill C-38 (which I rightfully heralded a triumph for Canada as a whole -- not just gays and lesbians), Canadian society has not collapsed in a puff of smoke. In fact, no frogs have fallen from the sky, no locusts have wiped out record numbers of crops, and the first-born of no MPs have been killed. Maybe god isn’t quite as pissed off about this as you assure us that he is, David. But I digress.

I think it’s actually kind of fun to watch rabid anti-same-sex-marriage activists squirm like a worm on a hook.

It’s almost as pitiful as David’s attempt at bartering with our dear Queen E.: “ Should you act in this, millions of us would surely become more fervent supporters of the monarchy than ever,” he wrote in his letter – received days before the recent Terror bombing. In the letter he also demonizes Paul Martin, claiming that he has divided the country over the issue – and that this division couldn’t possibly have anything to do with the issue itself. Nope, it’s all Paul’s fault. He also tries to play on old acquaintances, suggesting that she “probably remembers” Paul Martin Sr., who was an ambassador to the UK.

David, it’s time for you to give Ronald Reagan back his haircut and join the rest us in the 21st century. While you’re at it, wake up and smell the maple nut crunch.
Perhaps the saddest thing about religious conservatives is that they continue to assert that governments should rule, more or less, according to exclusively Christian beliefs. If some of them had their way, the Bible would be the only book of law in the land.

Which is just the answer we need: relying on religion, which at best provides us with incomplete and limited answers, to tell us how to carry on every aspect of our lives in the real world – a world of unlimited possibilities.

It seems that even as we take steps toward a new future, people like David Mainse would happily banish us back to the middle ages.

But there is one thing I do know: if David Mainse manages to defeat bill C-38, Broadway will be next.

Mark my words.
Posted by Patrick Ross at 7:50 PM No comments:

Birds of a Feather Terrorize Together

Question: what do the Islamic perpetrators of Thursday’s London subway bombings and those responsible for the violent G-8 protests in Scotland have in common? Answer: quite a bit, actually.

No, they aren’t acting in collusion with one another. But there are more similarities between the two than one would believe, and they circle primarily around the intentional use of violence to achieve their goals.

Both claim they’re fighting against oppression – to end the tyranny of the current patriarchy by any means necessary. Both would happily replace the current patriarchy with one of their own, and it is this that makes them all the more dangerous.
One can point to groups such as Al Qaida and see a face that is not all that different from organizations such as the Black Bloc, or (to a much lesser extent) the Earth Liberation Front – a face that threatens violence from behind a mask of anonymity. The point of it all, of course, is not violence, but fear. Fear which is to be used as a motivator in support of a political cause. It is violence under threat of further violence. As one (unnamed) anarchist promised: “This is just the start of it. Nobody wants to get arrested ahead of Wednesday. We've got a lot more planned.”

For these people, the use of violence serves a number of purposes. It is a badge of honor. It is a symbol of dedication. It is a political shortcut. More than any of this, however, it is a demonstration of defiance. And, of course, defiance breeds defiance.

There is an old saying: you catch more flies with honey than with vinegar. While there is an air of naivete surrounding this parable, there is an equivalency when it comes to political activism. That is, peaceful demonstrations generally get a better response (both from the police and the public eye) than violent ones. “We want to allow the peaceful protest of the majority to take place unhindered by any rogue elements who are set on disruption and confrontation,” says Constable John Vine, speaking to press after Tuesday’s violent demonstrations in Edinburgh. “Make no bones about it, if we encounter people who are prepared to use violence to achieve their aims ... we will take robust action.”

Of course, there is always the fact that violent protests get more attention. And while one can argue that these events do more to hinder their cause than to help it, it is also true that there is no such thing as bad publicity. This is unfortunate, because it will always draw the intentions of belligerents toward violence.
Of course, some times the system does fail. The case of peaceful protesters in Vancouver who were assaulted by RCMP officers under orders from then-Prime Minister Jean Chretien comes to mind. Some times, even peaceful activists place themselves at risk of attack.

All this aside, even more so than any of these similarities, there is one other that is just as important to remember: each group is actually a minority amongst the larger groups that it claims to represent. Despite the alarmist assertations of fear mongers, the majority of Moslems are not terrorists. Furthermore, as much as political and economic conservatives would have one believe, the majority of protesters protest peacefully. To these people, a simple message must be extended: stay the course. To those who understand the power of dissent and the value of peace, keep doing as you have. There are those who appreciate what you do, for all the right reasons.

And as much as some people may want to have us believe other wise, terrorists are generally appreciated only for the wrong reasons. Ultimately, that makes all the difference.
Posted by Patrick Ross at 2:04 PM No comments: