Of Badware and Blogging Tories

Has cyberwarfare come to the Canadian blogosphere?

It's a question perhaps best answered with a question: is this merely the first time we've known about cyberwar tactics in the Canadian blogosphere? It doesn't actually answer the original question, nor does it even answer the question of whether the reporting of BloggingTories.ca as a badware site is part of any such a campaign.

As it pertains to the matter of coincidence, perhaps the internet is one of the few examples where life truly offers any. It is, after all, a large and diverse environment, wherein many different websites, each featuring their own software, interact with one another in a largely unpredictable manner.

It's possible that may at play in an episode that has many visitors to the website encountering this in its stead:

StopBadware, an organization Google and Mozilla cooperate with to identify so-called "attack sites" define badware as "software that fundamentally disregards a user’s choice about how his or her computer or network connection will be used." 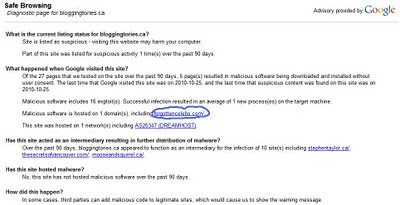 The website forgottencelebs.com is pretty much exactly what it sounds like: a celeb news website. The more important detail is that it isn't listed on the Blogging Tories aggregator.

Considering that the Google diagnostic page explicitly states that BloggingTories.ca has not hosted malicious software, it's clear that the malicious code has been added by a third party: that BloggingTories has merely been used as an intermediary to disseminate malicious software seemingly hosted on ForgottenCelebs.com to Stephen Taylor's blog, The Secrets of Vancouver, Moose and Squirrel, and seven other sites.

Interestingly enough, none of the sites listed above have been identified by StopBadware as an "attack site".

The question remains: did some technologically-savvy member of Canada's online far-left community deliberately add some bad code to the BloggingTories site in orer to justify reporting it to StopBadware as an "attack site"?

There's no question that many of them are obsessed with the site and would like to see it shut down. Adding malicious code to the site has certainly, at least in the sort term, accomplished the next best thing.

There's no question that Canada's far left is frustrated. No matter what they do, they can't convince Canadians to thoroughly repudiate conservative values, and can't seem to win on their own.

There's no reason to assume that a denizen of Canada's left is behind this: but there's ample reason to ask the question.