Welcome to what has become one of the most controversial websites in the Canadian blogosphere.

Oddly enough, in reading the Nexus, it could be easy to miss what is so controversial about this site. Here, a premium is placed on thoughtful and deliberative takes on the issues of the day -- the goal being to sift out a moderate position on whatever those issues may be.

A great many people don't seem to understand this. And there's a good reason for that.

The blogosphere is full of ideologues and extremists of varying stripes.

And while ideologues and extremists often prove themselves adept at fantastical feats of fancy, they tend to lack imagination -- moreover, the imagination necessary to understand how someone could even possibly disagree with them, or see the world differently than they do.

In order to account for this lack of imagination, the ideologue has found a truly wondrous tool: the ability to moralize disagreement.

Those who have successfully managed to internalize this moralization of dissent have found an amusing epithet for the Nexus -- the suggestion that it is "aptly-named":

This tendency becomes particularly pronounced in the face of criticism, and can be identified in individuals as well-known for their extremism as Joyce Arthur:

Of course, there's actually nothing extreme about the notion that those who commit crimes -- such as acts of violence against a pregnant woman with the intent of killing her unborn child -- should be tried and convicted for the crimes they commit.

Left-wing extremists, meanwhile, don't believe that people should be tried for the crimes they commit if not doing so would benefit them ideologically.

It particularly helps if they can moralize the victims of any crimes that ideologically benefit them. They've learned some of the lessons of history quite well: that if you can effectively denounce a particular group as "evil", you can justify doing absolutely anything to them.

Likewise if you can successfully make the case (at least in your own mind) that your opponents, by virtue of disagreeing with you, have "irredeemable character flaws":

Apparently believing that nearly everyone's ideas are worthy of consideration, and that people should be judged morally worthy according to their actions and not merely their beliefs, one can be branded an "asshole" in the mind of the extremist ideologue.

Rather, it's a tremendous compliment. 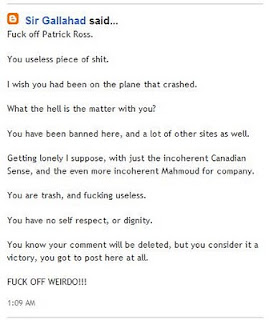 Or, even better yet, this: 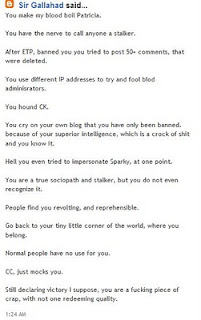 Sir Galahad can say what he will about the Nexus, and it's author. When we have a beef with someone, we settle it with them. We leave their kids out of it.

Of course, in the minds of sir Galahad and the numerous lunatics he runs with, this isn't about who has done what. Rather, it's about an extreme left-wing agenda that -- contrary to the harping on Saul Alinsky's Rules for Radicals as the Bible of the mordern extreme left -- can tolerate no rules.

This agenda doesn't even recognize its opponents as common citizens. Rather, this agenda represents its opponents only as enemies, who are to be destroyed by any means necessary. When they fail to destroy their enemies is when the frustration really boils over.

If opposing the ideological agendas of extremists makes one an "asshole", then the assholes of the world need to take no shame in the label. Rather, it seems that being an "asshole" is something that one should actually be proud of.

Whereas being one of the too-sensitive, converse-moralistic extremists of the world? Not nearly so much.

They can all eat a dick.

And speaking of dickishness, it's my sincere hope that the Nexus is one day preserved for future generations. Some works, of a certain significance, simply must be preserved: