Five Reasons to Be Proud This Canada Day

Canada's top five cultural icons, according to myself

Today, Canadians across the country are celebrating 141 years of Canada.

To help determine what Canadians think of as our identity, the Dominion Institute and Citizenship and Immigration Canada have been conducting a survey of Canada's cultural icons.

As of the time of this writing, the top five consisted of the Maple Leaf, Vimy Ridge, Hockey, Queen Elizabeth and the Canadian Flag.

Like any other Canadian, we here at The Nexus, we all have our own ideas on Canadian identity. The following are my own personal top five Canadian icons, and explanations as to why: 1. Terry Fox - No one in Canada's history has ever embodied the spirit of our country quite the same way Terry Fox does.

When diagnosed with osteogenic sarcoma -- bone cancer -- at the age of 18, many people would resign themselves to a long, hard illness with little chance of recovery. But not Terry Fox.

Even after the cancer took his leg, Terry took to the Highways of Canada, running across the country to raise money for cancer research. As every Canadian knows, he didn't make it past Thunder Bay, when his cancer reappeared.

He would pass away on June 28, 1981, but would leave behind him a legacy that eventually blossomed into the Terry Fox run, taking his legendary Marathon of Hope worldwide.

Terry Fox represents everything good about Canada: dedication, generosity, self-sacrifice and, through his memory, global leadership.

2. Ottawa - Canadians have long accepted the reality of Canada as a country made up of at least two solitudes, in the phrase coined by author Hugh MacLennan.

Those Canadians with a firmer grasp on Canadian history would likely amend that to three solitudes -- the first two being English and French Canada, and the third being our aboriginal community -- but even then, Ottawa remains a symbol of the disjointed unity that may permanently elude and challenge us.

Built upon the foundations laid generations before the arrival of Europeans to North America, Ottawa straddles Ontario and Quebec where the Odawa First Nations had maintained a village named Kanata (a village that, like Ottawa has grown over time to become part of the Ottawa Metropolitan Area).

Besides remaining the seat of Canadian government, Ottawa is where the three most dominant strains of Canadian culture -- British, French and Aboriginal -- intercede most dramatically.

So long as there is a Canada, Ottawa will remain the strongest reminder of our three-pronged historical heritage.

3. Lester Pearson's Nobel Peace Prize - In 1957 Lester Bowles Pearson -- or "Mike" as he was dubbed by his Air Force instructors, a nickname that stuck with him throughout the remainder of his life -- won the Nobel Peace Prize.

In doing so, he put Canada on the map in terms of global leadership that his varying successors would try to emulate, but never quite equal.

Pearson was awarded the Prize for his work in establishing the United Nations Emergency Force that helped ensure a (at least temporarily) peaceful resolution to the Suez Crisis of 1956.

He would eventually parlay the award into the Leadership of the Liberal Party and the Prime Ministership of Canada.

Pearson's award remains a vital symbol of Canadian leadership on the global stage, and a reminder that Canada needs to remain committed to leadership as such.

4. The Royal Canadian Mounted Police - Many Canadians would likely name "freedom" as one of the most important reasons to be proud to be Canadian.

But the simple fact of the matter is that freedom only exists where order and justice are maintained.

Originally established in 1873 as the North West Mounted Police, the Mounties have safeguarded law and order in Canada for nearly as long as there has been a Canada.

The Mounties are known the world over as one of the top law enforcement agencies in the entire world, and they remain ambassadors for law and order the world over. Not only do they serve in Canada, ensuring our own safety and security, but they have also volunteered in wartime and peacekeeping operations overseas.

While many a controversy has been stirred over several progressive modernizations of the force, the very freedom that so many Canadians pride themselves on could never exist if not for the men and women who have pledged their lives to upholding it day in and day out. 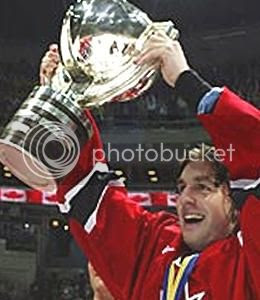 5. Hockey - While it may seem like a cliche, there is simply no denying it: Canadians live and breathe by hockey.

Hockey Night in Canada remains one of Canada's top-rated television programs, and when it comes to international competitions like the World Junior Championships, Olympics and World Cup, Canadians practically demand victory from their teams.

Like the other items on this list, hockey represents virtually everything it means to be Canadian: energy, dedication, toughness, and a solid work ethic.

Certainly, not all Canadians will agree with everything on this list. But that's the magic of being Canadian: that we've drilled diversity so deeply into our national identity that what it means to be Canadian can mean different things to different people.

This is only partially what Canada means to me.

On that note, I bid you a temporary adieu and a happy Canada Day.