There Is Something Deeply Wrong With Some of These People...

If you were to ask any of them to their face, the far-left in Canada are the champions of rainbows and puppydogs. Their leaders are all "inspirational", and their causes in the best interests of "99%".

But scratch the surface of some of these individuals, and what is left underneath is a complete lunatic. Stark, raving, mad. And brutish to the core.

For evidence one needs look no further than the individual who identifies himself as @HarrisAJackson. The "A" apparently stands for "Ace".

As it turns out, Ace is an advocate for the long gun registry. There's very little wrong with that, in and of itself. But how Ace deals with political defeat leaves a lot to be desired. He tweeted:


"Wonder how many hard core Cons will think deregulation of the long gun is a good idea, when they're [sic] son or daughter ends up dead? We can only hope its a conservative victim, since those with brains and national pride are fighting to keep it alive."

Ace subsequently insisted he didn't wish gun violence on anyone, but screencaps have the final say:

(Following several Tweets of this image directly to him, Ace still couldn't figure it out.)

Even while objecting that he hadn't wished gun violence on anyone, he literally couldn't stop. Couldn't help himself. 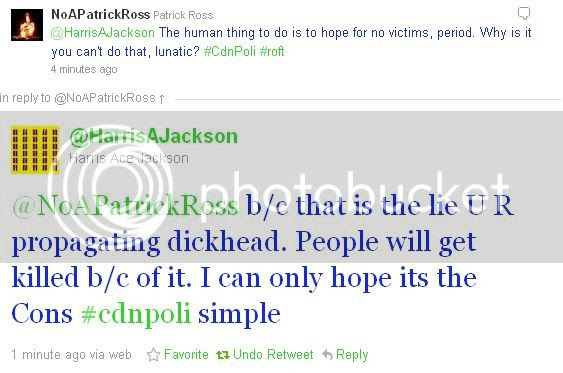 This issue has keenly focused the mania of individuals like our dear Ace. Irrational rage that would otherwise have thrashed helplessly across the Twitterverse is now brought to bear on this singular issue. For the first time, we can see just how disturbed these people are.

And Harris Ace Jackson is very disturbed indeed. The civilized approach to the issue of the long gun registry is -- whether one supports it or opposes it -- to wish for no gun violence. Ace has adopted a very different approach: he simply wishes the gun violence to be aimed at a very specific group of people.

It's sick. It's evil. It's reflective of someone crying out for help.

His LinkedIn profile identifies him as "Senior Analyst at UFO Investigator Citizen Reporter". He lives in the Vancouver area.

If you, or anyone you know, knows Harris Ace Jackson, reach out. Let him know about any mental health resources in his area, and urge him to seek help before he does something he may not be mentally healthy enough to regret.