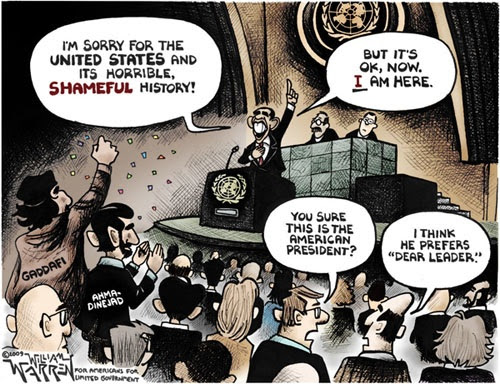 US President to depend on corrupted internatnional institutions

Speaking recently at West Point, US President Barack Obama has promised that his administrations's first national security strategy will foster a "new international order" in which international institutions will be used en lieu of American power to solve global problems.

"The international order we seek is one that can resolve the challenges of our times," Obama announced. "Countering violent extremism and insurgency; stopping the spread of nuclear weapons and securing nuclear materials; combating a changing climate and sustaining global growth; helping countries feed themselves and care for their sick; preventing conflict and healing its wounds."

Obama promises a national security strategy that will renounce the Bush doctrine of preemptive war and the will to consider the option of unilateral action. (Not necessarily unilateralism, but unilateralism if necessary.)

Instead, Obama will re-invest faith in international institutions like the United Nations, even despite the numerous and increasing failures of the UN.

"Yes, we are clear-eyed about the shortfalls of our international system," Obama insisted. "But America has not succeeded by stepping outside the currents of international cooperation. We have succeeded by steering those currents in the direction of liberty and justice - so nations thrive by meeting their responsibilities, and face consequences when they don't."

Unfortuantely, the kind of soft power foreign policy that Obama has intended his intention to defer to is remarkably inept at applying consequences to countries that fail to meet their responsibilities.

The genocide in Darfur continues unabated. Iran continues to violate human rights, while while disgustingly managing to procure a seat on the UN Commission for the Status of Women. North Korea sinks South Korean warships with what will eventually amount to full impunity. Climate scientists are revealled to have polluted the scientific process -- right down to their prized process of peer review -- to advance a politicized climate change agenda. Poverty in the developing world continues to run rampant despite the expenditure of trillions of dollars to solve the problem.

This is the international system that Obama intends to so thoroughly defer to.

It is a system that has been fundamentally corrupted, and may need to be razed from the top down so that they may be rebuilt from the ground up.

The UN has become an agent of a global statism that has not only lost influence among the G20 countries that it needs in order to advance such an agenda, but lost any semblence of moral authority it could ever lay claim to.

Like so many of the plans on Barack Obama's agenda, his "new international order" desperately needs to go back to the drawing board and consider global realiteis before implimentation.