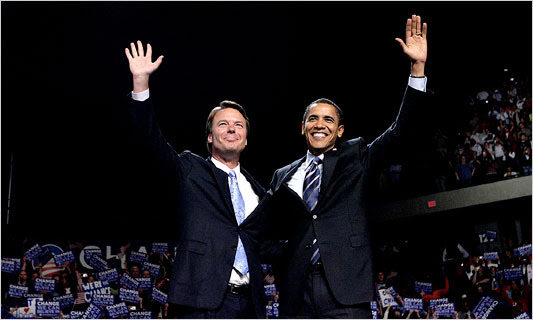 As the months-long campaign for the Democrat Presidential nomination has drawn on, contenders Hillary Clinton and Barack Obama have both been looking to land that perfect knockout punch -- either at the polls, or in terms of key endorsements.

Yesterday, Barack Obama has probably landed that punch. It was rumored to be months in coming.

"Democratic voters have made their choice, and so have I," Edwards announced.

Edwards took some time out to lavish some praise on Hillary Clinton, whom he reportedly considered endorsing.

"What she has shown ... is strength and character, and what drives her is something that every single one of us can and should appreciate," Edwards said. "She is a woman who, in my judgment, is made of steel, and she's a leader in this country not because of her husband but because of what she has done."

Clinton has put up a very respectable struggle, but Edwards' endorsement may have knocked her campaign down for the last time.

In terms of the delegate count, Edwards' endorsement is largely inconsequential. He has a grand total of 19 pledged delegates. None of them are obligated to support Obama, and they aren't nearly enough to secure a decisive victory.

But with Obama ahead in the popular vote, pledged delegates and even superdelegates (which Clinton had looked to as her last, best hope), Edwards support should be enough to swing enough of his supporters to transform Hillary Clinton's already-uphill climb into a sheer 90 degree grade.

Of course, given the numerous calls for Clinton to quit the race so Democrats can focus on John McCain, and Clinton's steadfast refusal to quit, to presume she'll finally throw in the towel would be more than a little bit premature.

At least we can presume Edwards finally got his Jet ski.